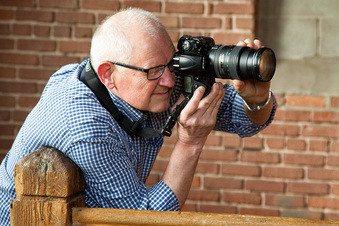 © 2015 - Photo by Rachel Bilodeau
I’m British and have worked in several places internationally, ending up with developing electric power stations in Turkey and moving to Istanbul in 2000. At retirement in 2012, I took up photography more seriously, beginning with imperial mosque interiors because of their wonderful form, colour, line and textures.  In summer 2012, a local gallery exhibited a series of my large‑scale, 16th-century Iznik tile images from these mosques, along with examples of my structural compound images and art photography. The exhibit then moved to the British Consulate at the time of the Queen’s visit to Turkey.

Wishing to move on to people-photography and building on a love of a wide range of music, I started photographing Istanbul street musicians in late 2012.  As a frustrated musician myself, I decided to focus on details, emotions, musical signaling and other communications between the musicians themselves and with
their audience. Catching the moment requires taking images in the hundreds per session. To get closer and build up my relationship with the performers, I started sharing the images I took with them. To this day, I maintain close relationships with many of the musicians, even though my wife, Elaine, and I moved to Montreal in
2014.

The scope of street music in Istanbul is quite broad, from traditional Turkish, Kurdish and Black Sea music to jazz, Iranian, Gypsy, French, Japanese and the countries of many other travellers passing through the city. On any afternoon or evening, one can see 10-15 players or groups of players on Istiklal Caddesi, Istanbul’s main
walking street on the European side and my main hunting ground.